The Lawhead Team would like to share the latest “One Cool Thing” about who is coming back as the new home buyer in town. 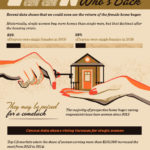 Recent data shows that we could soon see the return of the female home buyer.

Historically, single women buy more homes than single men, but that declined after the housing crisis.

They may be poised for a comeback.