The Lawhead Team would like to share the California Association of Realtor’s One Cool Thing on Home Improvements that actually pay you back.

The following information on home improvements is from CAR’s One Cool Thing.

Kitchen Remodel – You can expect to recoup 60-120% of your home improvements investment on a kitchen remodel, as long as you don’t go overboard. Never make your kitchen fancier than the rest of the house, or the neighborhood for that matter!

Bathroom Addition – If your home has only one bathroom, you can recoup a large chunk of your investment by adding another one. It is estimated you can recoup 80-130% of whatever you spend adding a bathroom. 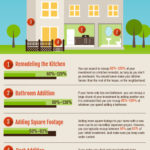 Adding Square Footage – Home improvements where you add more square footage to your home with a new room can be an incredibly expensive project. However, you can typically recoup between 50% and 83% of your initial investment. Just make sure you keep your costs under control!

Deck Addition – If you make your deck and your backyard more appealing, your house will be more appealing to prospective buyers when you decide to sell. Homeowners can recoup 65%-90% of their home improvements investment by adding a deck.

Learn more about home improvements at One Cool Thing’s website.