The Lawhead Team would like to share some helpful tips on making sure you tackle your home remodeling project the right way – calling in an expert vs. doing the project yourself! 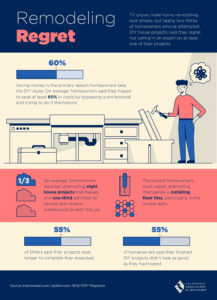 TV shows make home remodeling look simple, but nearly two-thirds of homeowners who’ve attempted DIY house projects said they regret not calling in an expert on at least one of their projects.

Saving money is the primary reason homeowners take the DIY remodeling route. On average, homeowners said they hoped to save at least 60% in costs by bypassing a professional and trying to do it themselves.

On average, homeowners reported attempting eight house projects themselves, and one-third admitted to having later hired a professional to redo the job.

The project homeowners most regret attempting themselves is installing floor tiles, particularly in the master bath.