San Diego home prices at the highest they’ve been in 5 years!

San Diego is experiencing great growth in home prices since the last 5 years. The Lawhead Team came across a great article from Fox 5 San Diego. Check it out:

“If there was any lingering doubt about the real estate comeback, these numbers should put that doubt to rest,” said Linda Lee, San Diego Association Of Realtor’s president. “The increase in price means more people will put their homes on the market, which is great news for buyers.”

The $450,000 mark is 23 percent higher than April 2012 and four percent above the median price in March, according to the SDAR. It hasn’t been that high since January 2008, when it was $475,000.   About three percent more houses sold last month, compared to the same month the year before. 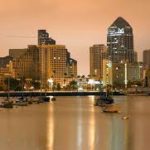 The SDAR reported that the median price of $288,500 for condominiums and townhomes was up 37 percent over April of last year, and slightly over that of March this year. The number of sales for multi-family housing was down 3 percent compared to April 2012.

Properties are remaining on the market for an average of about two months, according to the San Diego Association of Realtors.