Most of us when were growing up had childhood heroes.

Some were cartoon characters and others were television actors and actresses.    For example, there was Prince Valiant, a brave warrior and gentleman – one of my favorite childhood heroes.

He was knighted by King Arthur after the heroic efforts to rescue the maid Ilene alongside Prince Arn of Ord.  After discovering Ilene had been killed in a shipwreck, Prince Arn gave the Singing Sword to Valiant after he had used it to hold back pursuers during their rescue of Ilene.  After being knighted by King Arthur, he aided in restoring his father as King of Thule.  Moving across Britain, Europe and the Holy Land, Prince Valiant fought invading Goths, Huns and Saxons.  Shortly after Prince Valiant was married to Aleta, she was kidnapped by Viking raider Ulfran. His courageous efforts to rescue her took through many lands until he defeated Ulfran and was reunited with Aleta. 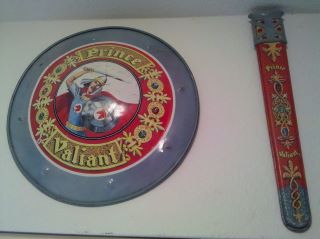 Prince Valiant showed an incredible amount of bravery and chivalry and as a boy, he was one of my heroes.  I still have the shield and sword holder I played with as a boy.  I think one of my brothers may have my sword, or my Mom took it away from me because I was using it on one of my brothers.  Either way, it’s missing.  Who was one of your childhood heroes?  Blog us and let us know.