Centennials: The Next Generation

The Lawhead Team would like to share the C.A.R.’s latest One Cool Thing about how centennials are preparing for the future. 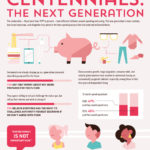 The centennials – those born from 1997 to present – have different attitudes around spending and saving. This new generation is more cautious, less brand conscious, and altogether less prone to the free-spending excess that characterized millennial teens.

They appear willing to not just challenge the status quo, but roll up their sleeves and work to change it

Slow economic growth, wage stagnation, consumer debt, and volatile global matters have resulted in centennials having an economically pragmatic mindset, especially among those in their first years of independent living.

“Saving Money IS NOT Important Now.”